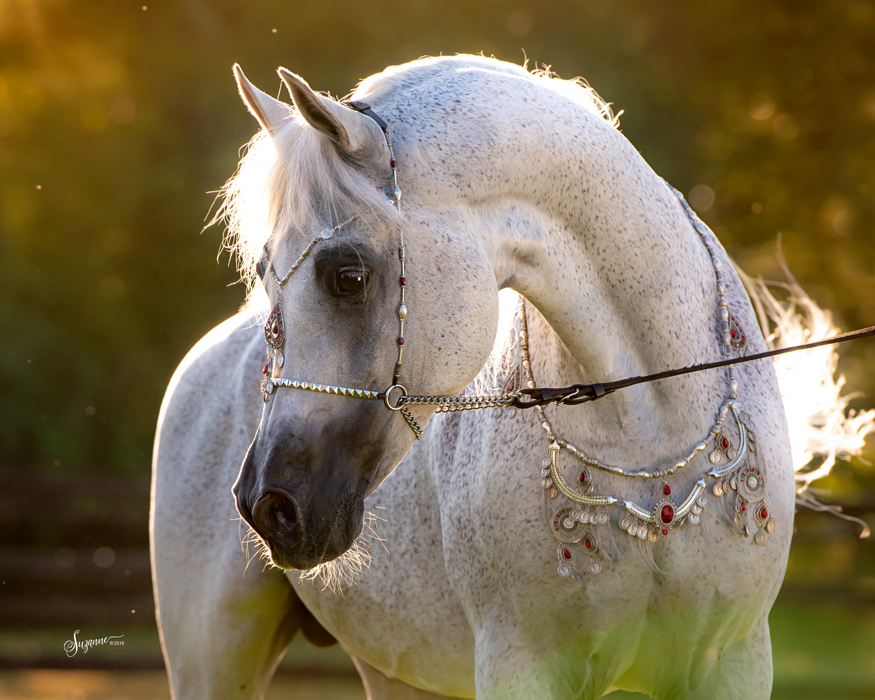 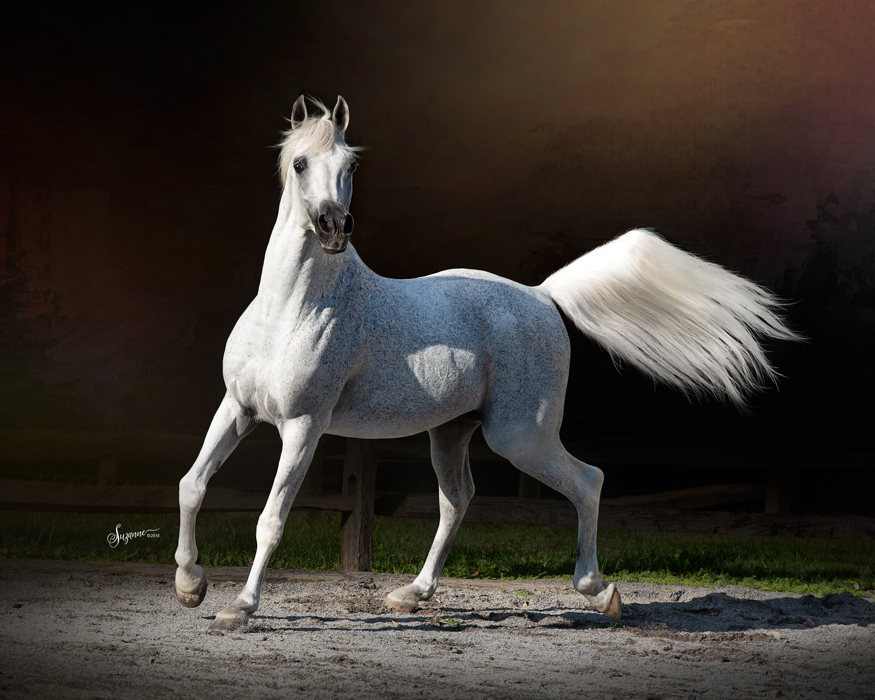 Eros Arabian Breeders proudly announces that Authentic Ibn Nawaal will stand this season at Select Breeders, Inc. in Chesapeake City, Maryland. We are excited to work with Dr. David Scofield at Select as they provide the finest in stallion management services. Their flexibility, dedication, and superior service is just what we’re looking for!

2018 was a very exciting year for Authentic Ibn Nawaal as he “wowed” the crowds at Scottsdale, charmed the breeders at The Egyptian Event, and managed to get a number of mares covered in between. At the end of August, 2018 he came home to Thornewood Farm for some much needed R & R, where he’s been king! And he’s been treated like royalty, as he so deserves. But it’s time now for him to return to the breeding shed, and get those mares covered!

For breeding information, please contact Lisa Cifrese at (609)577-1976 or AuthenticIbnNawaal@gmail.com 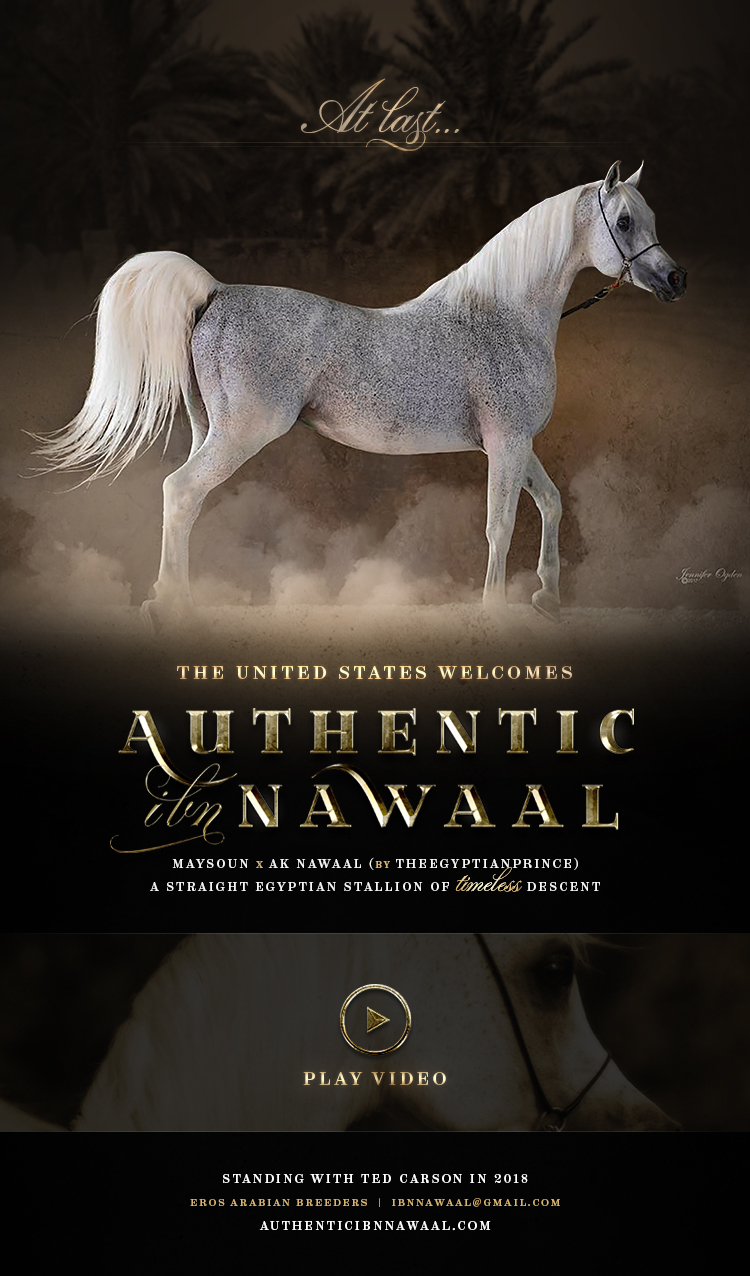 After thirty-five years of breeding Straight Egyptian Arabians, finally, Thornewood Farm, as part of Eros Arabian Breeders, has discovered this stallion worthy of owning. We are proud and pleased to offer Authentic Ibn Nawaal to American breeders! 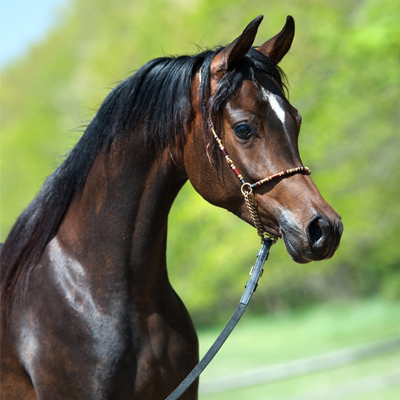 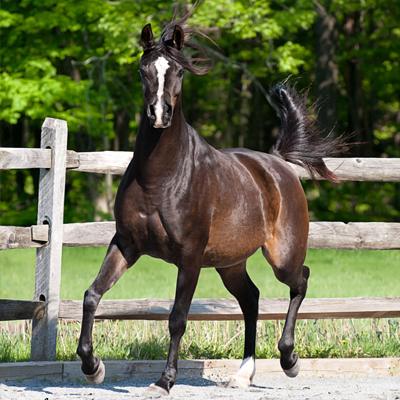 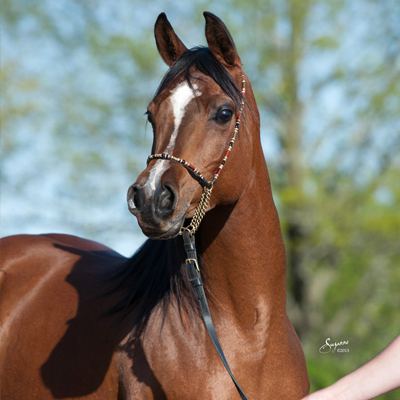 Thornewood Mares on the Move!

Being successful as a breeder means helping other farms to get established. Thornewood is pleased to announce the sales of the following mares who are making their new homes around the country.

Congratulations to Diamond G Arabians of Sarasota, Florida on the purchase of Bellavita TF. This tall and elegant mahogany bay mare is being trained under saddle for her new owners, Theresa and Dwain Gadway. With a star-studded pedigree, becoming a breeding horse is in Bellavita’s future as well.

The stunning Thee Desperado daughter Bint Kaveta traveled north to Hamburg, New York to her new home at WillowHill Farm Arabians. An incredible riding horse, and a great producer, we know that “Kaveta” will be an asset for owners Karen Farrell and Matthew Hillman. 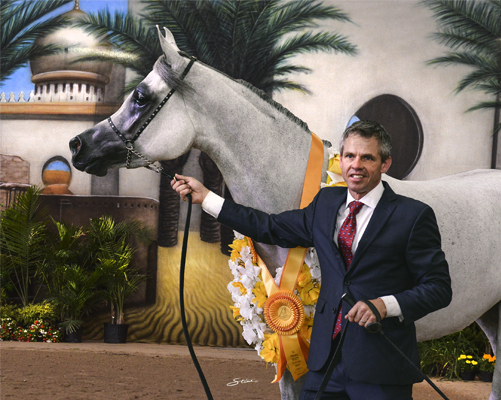 Thornewood Farm joins Al Azure Arabians in celebrating the significant wins of the stunning Skyy daughter, Jamila TF. Just when we thought Jamila’s 2016 show record couldn’t be topped, this elegant four year old mare took home top honors at the 2017 Egyptian Event in Lexington, Kentucky. With Georgia Applegate on the lead, Jamila returned to the ring in the Amateur to Handle class, taking home the blue ribbon. Then it was on to the Four and Five Year Old Mares class, where Jamila was named the unanimous class winner. Saturday night’s championship class, with Ted Carson on the lead, was cause for much celebration, as Jamila TF was crowned Bronze Senior Champion Mare. ROCKSTAR INDEED! 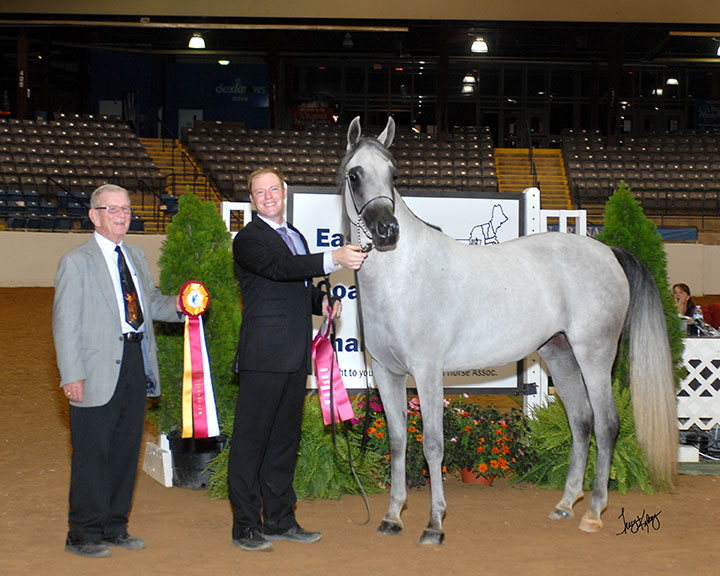 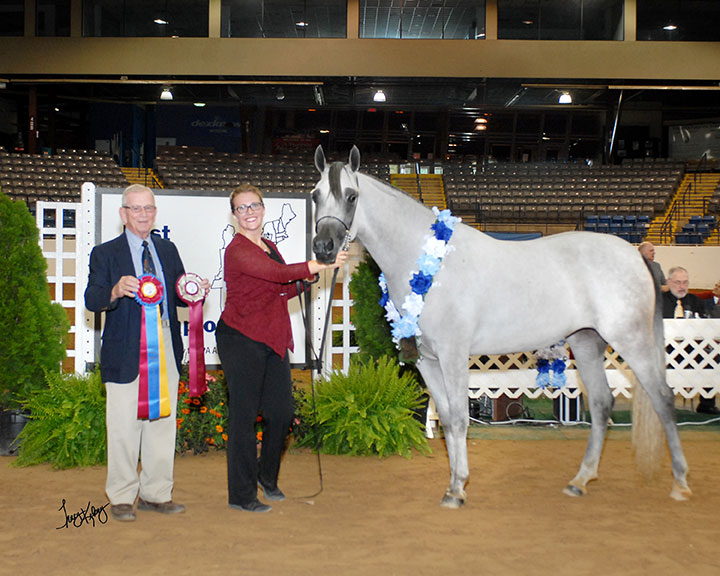 A Rising Superstar at Thornewood Farm

This summer, Thornewood Farm traveled to Lexington, VA to the East Coast Championship Arabian Show to cheer on a mare we had bred and raised, Jamila TF. What a delight to see this beautiful 3-year old Skyy daughter compete. How thrilling to see this mare become a champion, for owners Mary Anne & Brian Applegate! Jamila TF was not only named the Reserve East Coast Champion Mare, she also won a Champion Mare Amateur-to-Handle title! Additionally, at the Eastern Arabian Show, also held in Virginia, Jamila TF was the class winner and Gran Champion Mare. These wins came on the heels of her big win at the 2016 Egyptian Event in Lexington, Kentucky. 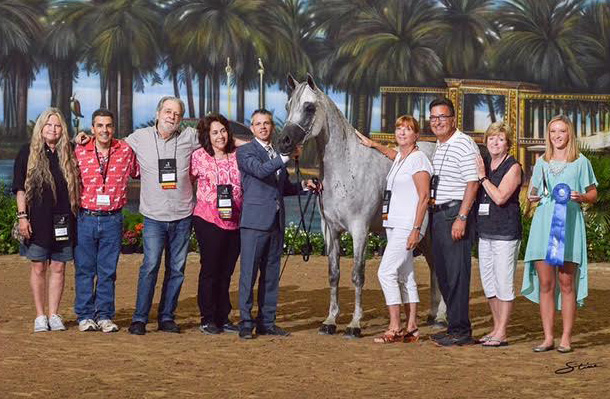 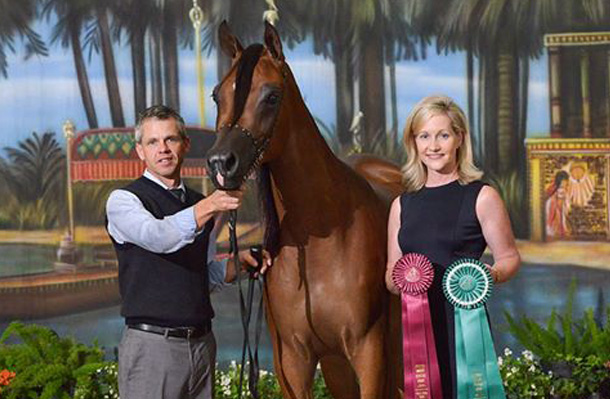 Thornewood Farm competed with four horses ​at the 2016 Egyptian Event, held in Lexington, Kentucky from June 7th through the 11th . ​The exquisite Luna Thee Cielo (Thee Desperado x Celeste TF) bred by Joe Piccolo and now owned by Kathleen Petrelli,​ was named the Silver Champion Senior Mare and Most Classic Head Winner ​ of the show​. Earlier in the week, Luna Thee Cielo had been judged Champion in the 4 ​& 5-year old mare class. It was an exciting win as this particular mare electrified the audien​ce with her brilliance, overabundance of Arabian horse type​ and charisma. Another Thornewood Mare, the tall, statuesque and elegant Jamila TF (*Mishaal HP x Skyy), ​bred by Lisa Cifrese and ​owned by Mary Anne Applegate, was named the Champion 3 year old filly. With Mary Anne's daughter, Georgia Applegate, she was also named the unanimous winner of the Amateur to handle 3 and over fillies. Sahra Rose, an Alixir daughter out of the Thornewood Farm bred,​ The Sultry Rose,​ earned a top five in a very competitive 2-year old filly class. Sahra Rose is owned by Patty Paige. Ruby Star MSA (The Sequel RCA x Misty Star MSA) stole the show with her exciting entrance and carved her place as a top five yearling filly. Ruby Star is ​bred and ​owned by Emily Schmidt, who also won the Volunteer of the Year Award from The Pyramid Society​. 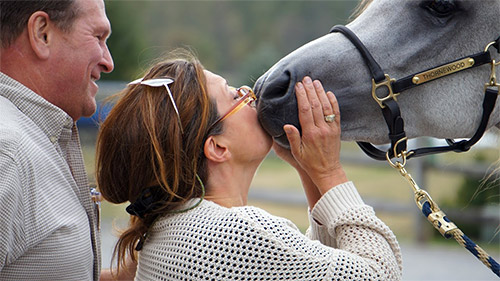 It was a warm sunny Sunday when Maryanne and Brian Applegate first came to visit Thornewood. After having seen a magazine ad some two years earlier, they finally cleared their schedule and stopped by the farm. It was love at first sight for Maryanne and Jamila TF (Mishaal HP x Skyy), the tall, striking two year old filly. But schedules collide, and it was difficult to find more time to spend together. Two months had passed before Brian returned to the farm, this time with his son, Brian David. “My wife never does anything for herself,” Brian informed Lisa, “and so we want to get this beautiful filly for her.” With a seminar one week away, plans were made to surprise Maryanne with the filly during a break time. On a perfect autumn afternoon, we saw Jamila TF beautifully fufill one woman’s dreams! There wasn’t a dry eye in the house as Jamila TF was presented to her new owner. Quoted Maryanne of the event: “next to my wedding day and the birth of my children, this was the best day of my life!” Congratulations to the Applegate family, and welcome to the Thornewood family. 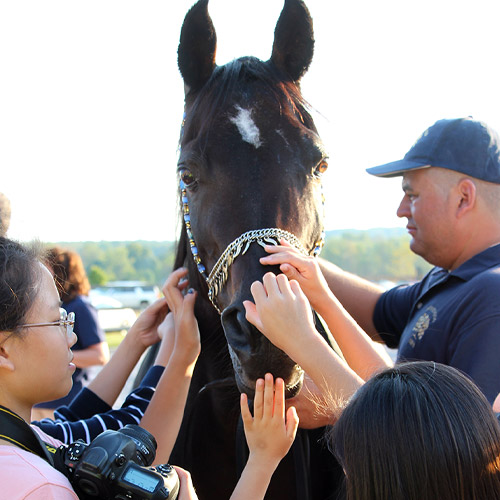 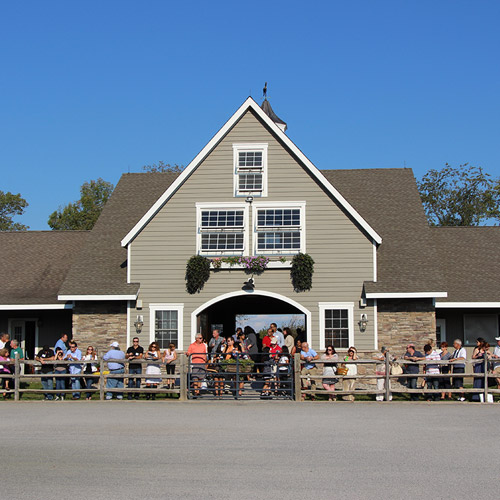 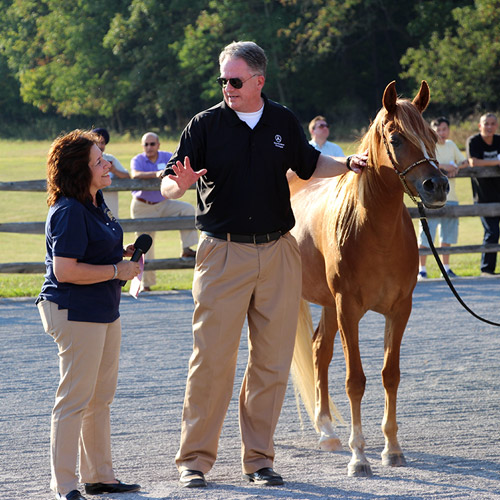 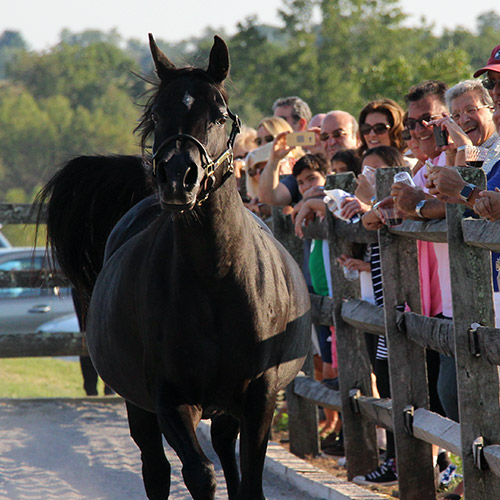 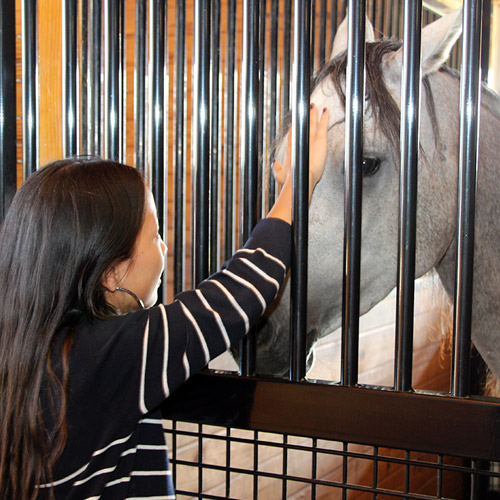 A Legacy of Excellence: What a Day it Was!

Bright blue skies and a light breeze made for a delightful end-of-summer day at Thornewood for the Legacy of Excellence Garden Party. Co-hosted by Mercedes Benz of Princeton and Flemington, the event was a huge success! And we mean huge! Some 300 guests were treated to an afternoon of good food, fine music, beautiful cars, and, of course, magnificent horses! After an opportunity to meet new friends and mingle with the horses, Ralph Suarez opened the festivities by introducing George Wilkening, General Manager of Mercedes of Flemington. Posing for photos with his favorite mare, Marilyn TF, George discussed some of Mercedes' sales opportunities and incentives. Of Marilyn TF, George remarked, "she's prettier than most women I've dated!" (Well, we don't know about your past girlfriends George, but we sure think Marilyn's one pretty girl!) Following introductions, the crowd was wowed by liberty demonstrations by Soleil TF, Neemah Alixa, and Luna Thee Cielo. The presentation of horses closed with the matriarch of Thornewood Farm, Skyy! The gate was opened and folks both young and not-so-young were treated to photo ops with the lovely lady.

Richard and I would like to extend our most sincere appreciation to all of those who attended and made this day so special. Additionally, we wish to thank Bob Greces, Dealership owner and George Wilkening for your support. We're looking forward to doing this again in 2016! 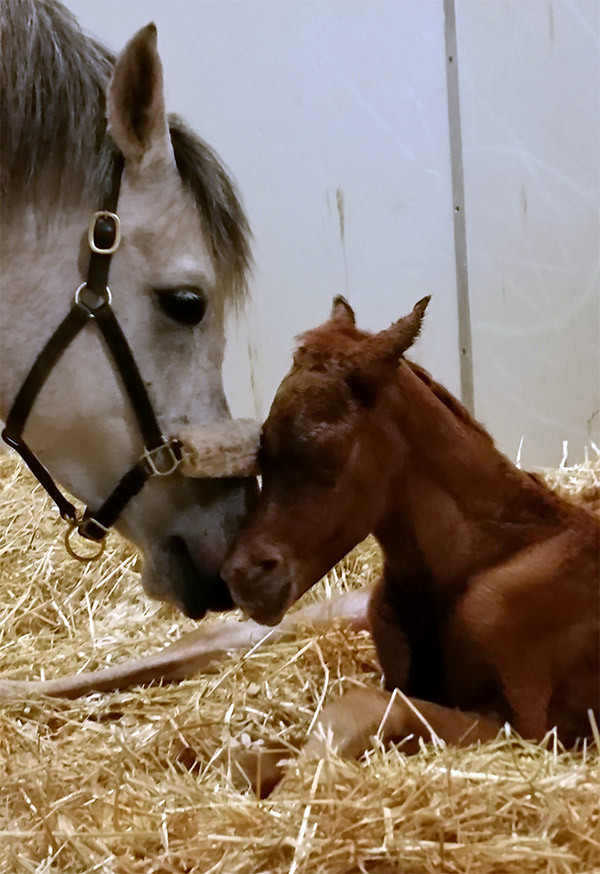 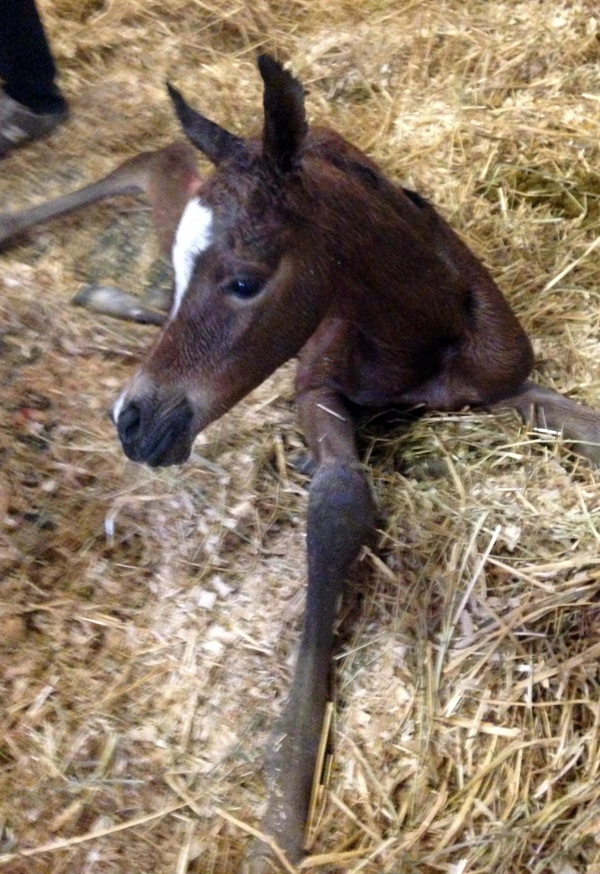 Additionally, Thornewood's "Mona Moms" are delighted to welcome Bint Bint Mona's new baby! Sired by Ramses Mishaal Nadir, this gorgeous bay colt was born April 18, 2015. Of course, he's already a favored son for Kathy Wolfe, Claudia Ciufo, and Jacquie Dadd (aka the "Mona Moms"). One more share of this great mare remains available. Please contact us if you're interested in becoming a "Mona Mom" yourself! 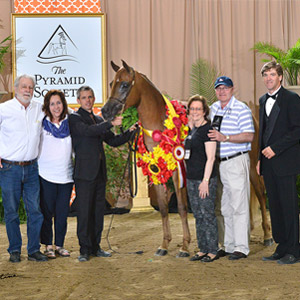 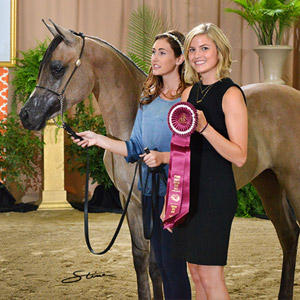 Gaia TF, owned by Martha and Bill Skapof and bred by Thornewood Farm was crowned Silver Junior Champion Filly at The Egyptian Event in Lexington, Kentucky. Held annually each June, "The Event" is internationally recognized as the most prestigious horse show for Egyptian Arabian Horses. "What an extreme honor to be recognized as the breeder of this beautiful girl!" Lisa exclaims. "Standing in the winner's circle on Saturday night with this gorgeous filly was the perfect ending to a magical week."

For Thornewood, the excitement started at the week's beginning, with the "Thornewood girls" all the buzz on the show grounds. By Thursday afternoon, what tension as Gaia TF entered the ring in the Two Year Old Straight Egyptian Futurity Fillies. As this was a Kalkata class, spectators placed bids on whom they picked as the class winner. Richard kept a close eye on the Kalkata bidding, excited to report that Gaia drew the highest bid! How thrilling when Gaia TF was named Reserve Champion in a very competitive class of beautiful fillies!

Aura TF's time in the sun came Saturday afternoon in the Egyptian Breeders Challenge Fillies class. Beautifully presented by Madison McDonald, Aura went Top Five in this class of lovely fillies. Thank you Madison, for doing such a great job with her!

Many thanks to all those at home and at ringside for cheering on our girls to victory! And to Martha and Bill for selecting this lovely filly. And a HUGE extension of gratitude to Ted Carson and his great staff for their magnificent job preparing, training, and showing our Thornewood girls. 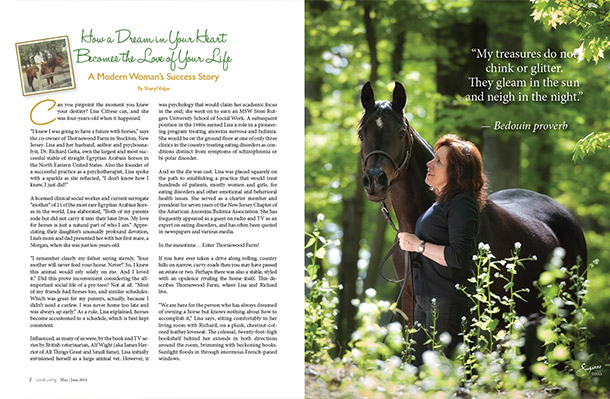 Lisa Cifrese shared her love for Straight Egyptian Arabians with She Spot Magazine for a May/June feature in their Premier Issue!

Can you pinpoint the moment you knew your destiny? Lisa Cifrese can, and she was four-years-old when it happened.

"I knew I was going to have a future with horses," says the co-owner of Thornewood Farm in Stockton, New Jersey. Lisa and her husband, author and psychoanalyst, Dr. Richard Geha, own the largest and most successful stable of straight Egyptian Arabian horses in the North Eastern United States. Also the founder of a successful practice as a psychotherapist, Lisa spoke with a sparkle as she reflected, "I don't know how I knew, I just did!"

END_OF_DOCUMENT_TOKEN_TO_BE_REPLACED 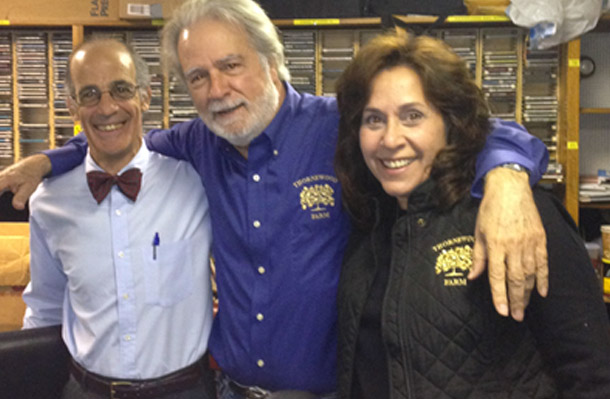 Thornewood Takes to the Airwaves!

Central NJ and Eastern PA fans who were tuned to WBCB, 1490 AM on Friday, September 14th, 2012 were able to catch Lisa Cifrese and Richard Geha on the air! Joining hosts Vincent Sirianni and Peter Buchsbaum on Real Estate Reality these Thornewood owners shared their knowledge and expertise of breeding and raising Egyptian Arabian horses. How exciting it was for both Lisa and Richard, albeit a bit anxiety provoking! In case you missed it, you can listen by clicking here and then clicking on September 14, 2012, or better yet, you can hear them again on Friday, October 12, 2012 at 9 a.m. when they make a return visit to the show. "Vince and Peter are a ton of fun," notes Richard. "We couldn't resist when they asked us to make another appearance." Additionally, excerpts from this program will be promoted on CBS.com, as well as on Facebook and Twitter. 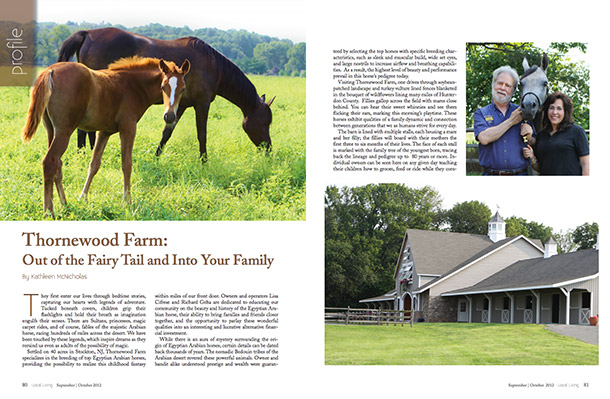 Noted author Kathleen McNicholas eloquently captured the essence of farm life in her widely distributed article, "Thornewood Farm: Out of the Fairy Tale and Into Your Family" which appeared in the September/October issue of Local Living. "We so enjoyed Kathleen's visit with us last August," Lisa remarks. "She was most inquisitive, wanting to learn all about the farm and our horses. And we couldn't be happier with the resulting article that appeared in this beautiful magazine!" We delight in sharing the story with you by just clicking on the link below. We extend our heartfelt thanks to the author, Kathleen M. McNicholas, to Karen Lavery, the magazine's publisher, and to the photographer, Amy McDermott for a job splendidly done!